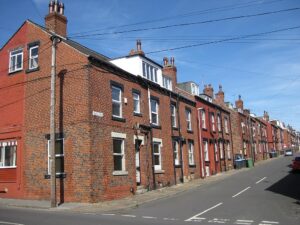 Its often said that history repeats itself. In fact, the ancients would say “there is nothing new under the sun” and one of my favorite quotes from President Truman is: “The only thing new in this world is the history you don’t know.” That has led me to think about some of the current economic development hurtles we see now at the beginning of the 21st Century: housing, vocational education and infrastructure.

[The Towns of] Swindon and Crewe flourished in the railway age of the nineteenth century, whilst Barrow and Jarrow belonged to a later period of iron and steel shipbuilding. The latter settlements were dominated not only by a few vital products, but by a handful of large companies with massive resources, which enabled them to undertake the housing of their first workers. These accounts may be complemented by the evidence of working-class dwellings in the early textile villages and larger industrial colonies of Lancashire and West Riding, or by the scattered documentation on the colliery villages which persisted through the major coal fields well into the twentieth century. 1

The above excerpt was taken from a Cambridge University Press paper published December of 2008, by Joseph Melling, talking about the evolution of company welfare policies. As Michigan discusses the missing middle housing ‘crisis’, I can’t help but look back to when corporations, who needed workers, would provide housing for those that worked for them and wonder why we aren’t promoting this now, especially in rural areas where there maybe just a handful of manufacturers or large employers per community. This may help the over-saturation of Low-Income Housing Tax Credits (LIHTC) housing and add to a more diverse housing real estate portfolio as well as relieve developers, or future developers of the hurtles of state funded programs that incentivize mixed-use developments.

One of the other elements prevalent in the industrial revolution was that corporations would train their own. It wasn’t long ago that nursing schools were part of hospital operations. Nor was it odd for a middle or high school student to be working for a manufacturer that would train them in how to do specific tasks either under an apprenticeship or mentoring. It could be possible that academia has hampered this method of training in the Western World over the past two centuries, as the disconnect between skills learned in academia don’t often translate to skills needed in the private sector.

I recall realizing this when I got out of college, the bank that I worked for had to train me in specific banking skills, that not often correlated to the expensive education I just completed. However, my Navel experience was quite different, as an enlisted Aviation Boatswain’s Mate, there were books upon books of Personal Qualification Standards or PQS training modules that were comprised of specific operation and maintenance tasks that had to be supervised and signed off by, a senior sailor acknowledging that you instructed on how to complete said task or maintenance. Perhaps private industry should revisit this method as we move into a time of technical/vocational skill gaps.

I foresee a rebuttal that would include the cutting into the profitability of the company if it were to take on its own housing and skilled training as it did at the beginning of the previous century. To that I would point to the popularity of, and mission-mindedness of, the “B-Corporation”. Those companies that balance purpose with profit or with the creation of more corporate related non-profits. One may also argue that there were horrific employee and child labor law abuses that made rise to the (some would argue antiquated) unions of today and mid-century economic environment. Though the development of corporate tax-credits which would encourage corporate housing and training; the caveat  that corporations would start paying taxes, we would tackle some of the reoccurring economic development issues related to housing and labor. An arguable point too would be that Corporate America just hasn’t felt or seen the need for either to do anything about it.

Current events concerning COVID-19 has shed some light on our infrastructure flaws specifically in the area of  high-speed internet. As college students flock home early to finish out the year online and as more and more people are asked to use their “work at home technology” areas without fiber-like connections will be at a loss. A shocking number of companies and schools were (aren’t) prepared to have workers/students work from home in addition to lack of internet infrastructure. Pandemic/biologic issues like this will drive people to less populated areas in addition to providing a great environment to live, work and play.