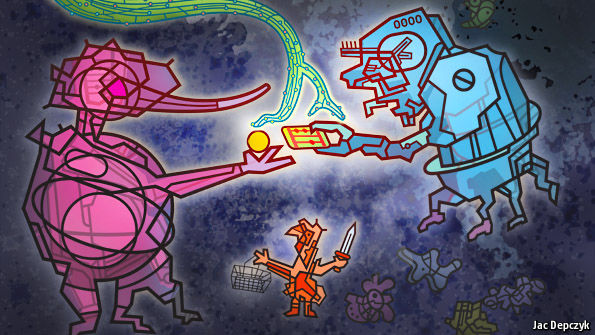 THE latest chapter in the “Star Wars” saga, “The Force Awakens”, was due to open in cinemas worldwide on December 16th, after The Economist went to press. Most fans will queue up to watch nail-biting lightsaber duels and catch up on the lives of beloved characters. Economists, who can render the most exciting of material dull, will be more interested in the state of the galactic economy. Did the destruction of the Death Star at the end of the sixth film in the series trigger a massive financial crisis, as a recent paper* by Zachary Feinstein, a professor of financial engineering at Washington University in St Louis, speculates? What sort of structural reforms might the new galactic government adopt?

While awaiting answers to these and other important questions, The Economist undertook an exhaustive, popcorn-fuelled examination of the first six episodes of the saga, in search of broad economic lessons. The “Star Wars” galaxy is both technologically advanced and economically stagnant, plagued by inequality and ossified political institutions. It is not entirely alien, in other words. Though far, far away, it offers three important lessons for residents of the Milky Way.

The first is the value of trade: the freer the better.
Fans moaned in dismay when the opening blurb of the first prequel (Episode I, released in 1999) dwelt on the details of a trade dispute. Yet in the distant galaxy, as in this one, trade conflicts are a rich source of dramatic tension. Among the most important technologies in the “Star Wars” universe is the hyperdrive, which allows travellers to evade the constraints of relativity and travel fantastic distances in a jiffy. Without the hyperdrive, moving between even the closest star systems would take years or decades, even assuming travel at near-luminal speeds—making trade difficult and costly.
Hyperdriven trade, in turn, enables a higher level of income per person than would be possible in a galaxy of planetary autarky. Some planets—those with a diversity of species and resources—would do well enough in a tradeless galaxy. But those like the desert planet Tatooine or the ice planet Hoth would be barren without the possibility of imports from other worlds.

Trade allows desolate planets to specialise in the production of valuable commodities—minerals in Tatooine’s case. Others can turn their entire surface over to farming, or to urbanisation (the imperial capital, Coruscant, is a planet-sized city). Richly endowed planets gain by specialising in industries in which they enjoy the biggest comparative advantage, using some of the proceeds to obtain goods or services they are not quite as good at producing themselves. At the same time, trade allows bleaker planets to export what resources they have in exchange for the imports needed to make them habitable—food, most obviously.

The gains from galactic trade are reduced, however, by the monopolies granted to powerful industry groups, such as the Trade Federation, which invades the peaceful planet Naboo in Episode I. Trade franchises are troubling for a number of reasons. They allow the monopolist to charge a premium, capturing benefits that would otherwise flow to producers or consumers. They encourage criminality by those seeking to circumvent the monopoly (like the smuggling of spice, a narcotic, by Han Solo, on behalf of the gangster Jabba the Hutt). And they encourage monopolists to devote valuable resources to rent-seeking. The Republic’s bureaucrats, we learn from Naboo’s then-senator, Sheev Palpatine, are “on the payroll of the Trade Federation”.

Although globalisation, or rather galacticisation, is an economic boon, it presents all sorts of political challenges that are not easily managed.

This is the second lesson. Dani Rodrik, an economist at Harvard University, argues that globalisation prevents countries from achieving more than two of three desirable goals: economic integration, national sovereignty and democracy. The inhabitants of the “Star Wars” universe face similar problems: the price of participation in the galactic economy is the acceptance of rules that irk planetary governments. In Episode II, a “Confederacy of Independent Systems” moves to secede from the Republic in response to regulations seen as placing an undue economic burden on poorer planets. The Rebel Alliance that battles the Empire in Episodes IV to VI is trying to restore democracy and planetary sovereignty, although that may well undermine the economic integration enabled by unitary government.

The droids we’re looking for

The third lesson is for those pondering their career options in an era of machine intelligence. The humans in the saga still labour at dangerous and unpleasant tasks—flying the galactic equivalent of fighter jets, for example, and toiling in dangerous spice mines—despite the crowds of clever robots that populate the galaxy. Indeed, the robots of “Star Wars”, for all their technological wizardry, do not seem to be able to do everything humans can. When Obi-Wan Kenobi, a Jedi knight, is shown an army of human clones—soon to become storm-troopers—commissioned by a colleague, he is told that they are “immensely superior to droids, capable of independent thought and action”. So far, so reassuring.

Yet humans also work because of the inequities of the galactic political system. Anakin Skywalker, the emotionally scarred Jedi who later becomes Darth Vader, first appears in the series as a slave on Tatooine. Anakin’s son Luke, though not a slave, harvests atmospheric moisture in relative poverty while those at the heart of the galaxy live in luxury. Humans will work for a pittance, if necessary, to scrape by. This may lead them to the dark side. Worse, it might prompt inquisitive souls to ask what forces drive such an uneven distribution of wealth, turning them into those most dreaded of creatures: economists.

“The globalisation paradox: democracy and the future of the world economy“, Dani Rodrik, 2011.